A shoot shall come out from the stump of Jesse,

and a branch shall grow out of his roots.

Sunday, December 27, 2015, will go down in my personal and vocational history as a day that three churches brought their ministries to a close.

As I presided over the closing of Zion Lutheran Church in Winfield (Sugarcreek), Pastor Karl Biermann was with the people of God at Gloria Dei in Cleveland, and Pastor Terrance Jacob was present with the congregation of St. Matthew’s Lutheran Church in Mansfield.

In my nearly 16 months as Bishop, we have now either closed or merged seven congregations. I’ve presided over four of those closures. Believe me, it’s not something one becomes easily accustomed to. The declaration that is made at the end of the liturgy – “I declare this congregation to be closed in the name of the Father, and of the Son, and of the Holy Spirit.” – was no less difficult that the first time I pronounced it a year ago on this same Sunday at Bethlehem Lutheran Church in Youngstown.

Our synod now numbers 173 congregations. When the Evangelical Lutheran Church in America was formed in 1988, the Northeastern Ohio Synod boasted upwards of 225.

Of the three that closed today, Zion, was the oldest. Though the present building was built about 1870, it traces its origins back even further, to 1835, when the Rev. Jacob Seidle came from Pennsylvania on horseback to minister to the spiritual needs of Lutherans in the Winfield area.

In keeping with the meaning of the name Zion, which means “city on a hill,” a frame church was built on top of a hill west of Winfield around 1845 under the guidance of the Rev. John R. Reck. The current building was constructed over the same foundation, with a majestic bell tower that can be seen for a considerable distance.

Zion was never a large church. It has always existed as part of a parish structure, sharing a pastor with other congregations. Most recently it has been a part of the Sugarcreek Parish, in partnership with Shanesville Lutheran Church. Lately, however, they have been averaging around nine people in worship on Sunday, not enough to sustain a viable ministry. They voted unanimously on September 13 to end their 165-year existence.

The church’s closing ends an era of distinction in that Zion has no running water, which means it was the only church building in our synod that still had an outhouse or a Port-a-John.

I asked our ministry team to offer their brief reflections on their experiences on this day in order to include them in this post.

“As the people of Gloria Dei worshiped for the last time as a congregation after 82 years on Sunday, I was struck by the sense of resolve expressed by a number of people for moving forward. Individuals and families are considering new congregational homes. Now-former congregation members are planning to meet at a Chinese restaurant in February. An engagement was even announced during the fellowship meal!

“I am given hope in this closing scattering – the hope of Jesus’ Parable of the Sower in Matthew 13 – where some of the sown seeds die, while those falling on good soil will yield exponentially more than their original numbers. As we prayed during today’s closing worship: ‘…that today will mark not only the end of an era but also the beginning of new opportunities for worship and service.’ Amen!”

Gloria Dei Lutheran Church was founded by a dedicated group of people on June 25, 1933. Like the others, it has been battling declining attendance.

“Bittersweet is a good description. It seems that the fact that the building will be used by another church to serve as a neighborhood church, is kind of softening the blow for people. Most people present were past members, so it was difficult to assess the feelings of those who stayed. Only about 11 normally attend on Sunday, but there were about four times that today…People didn’t want to leave the sanctuary. People kept looking up at the dome, lit up from the inside. Many of the regulars thanked me for coming, saying it meant a lot to have me present.” 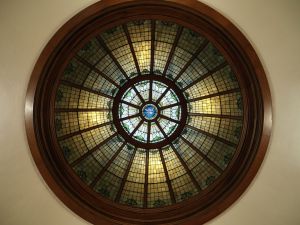 St. Matthew Lutheran Church was organized Oct. 25, 1903 with 52 charter members. In 1958, the church had 1,200 baptized and 750 confirmed members. In recent months, average weekly worship attendance was down to about 11 faithful, as Pastor Jacob noted.

The people of St. Matthew voted to give their building away to a new ministry. The church has been donated to the Revs. Tommy and Kim Carter of Columbus, who plan to operate New Life International Deliverance Ministries at the site and conduct outreach at the church/community center. So even though St. Matthew’s will close, the body of Christ will take on a different form, a new shape. 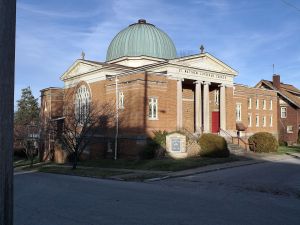 That is just one of many reasons that, despite what seems to be gloomy news, I am hopeful.

I stress two points in my closing homily, which I’ve had some practice in developing over the course of the past year.

One is that it’s not the people’s fault that the church is closing.  It’s human nature to beat ourselves up when a church building and its ministry come to an end. But closing may be the most faithful choice the people can make when attendance is dwindling and budgets are shrinking.

The other is that God is not done with them yet. God is calling them to new ventures, the likes of which they cannot see the ending.

The image that has been dancing in my head is that of “the shoot from the stump of Jesse” that I featured in my opening verse of Scripture.

This reading from the prophet Isaiah, usually heard in Advent, has become interpreted Christologically to foretell the coming of the Savior. Viewed in light of the church’s current struggles with growth, I take it in a totally different manner. 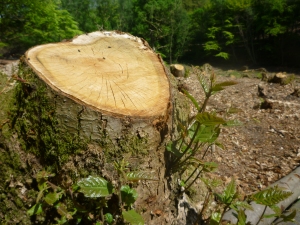 First, the image of the stump itself. A tree stump may look dead, but it is very hard to kill it off completely. That is the picture offered to us by the prophet, of the promise of God. Secondly, if you’ve ever observed a tree stump, you’ll notice that it most likely has shoots of fresh growth coming out of it from nearly everywhere. Possibly because the roots below are embedded so deep they are next to impossible to totally eliminate.

The stump of Jesse tells a story about the resilience of hope. Hope lives on no matter how bleak things may appear. New beginnings are possible even when we seem to be out of strength. New life can emerge even out of our failures.

The human tendency is to base our identity in physical structures knowing full well that they will someday be torn down.  However, if we base our identity in Christ, we’ll know that God’s love for us will never end nor can it be physically destroyed. The things we humans build, no matter how grand, will perish; the things God builds, no matter how small, will endure, even to the end of the age.

← A CHRISTMAS MESSAGE FROM BISHOP ALLENDE
DRAWING NEAR TO LENT →

2 comments for “THE STUMP OF JESSE”

Left at the Altar

Faith, politics, and other stuff

Walking Together in Faith

Seeking to accompany our global friends, neighbors and strangers--with Christ as our guide. We invite you to journey with us as we move along the path of discipleship.

We Talk. We Listen.