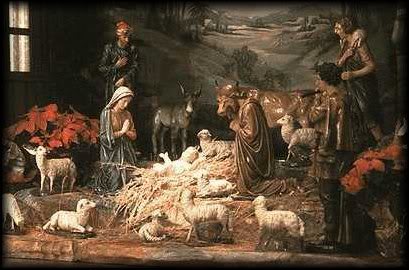 I learned a new word today – prettify.  “Prettify,” according to an on-line dictionary, means, “To make pretty or prettier, especially in a superficial or insubstantial way.”

I came across the word in a reflection I was reading as part of my daily devotion.  It was used in reference to the manger scenes that become prevalent around this time of the year as we prepare for Christmas.  I had never thought of the manger scene in this term.  I have always used the word sanitize, which in some way is much stronger; but prettify gives it a certain charm that, as the definition states, makes it superficial.

We tend to become superficial people around this time of the year, showing kindness in an insincere sort of way.  We put our best face forward, reach out to people we would otherwise have never given a second glance, and give generously to causes that on other occasions occupy not even the deepest recesses of our minds.  It all stems from that beautiful manger scene that we glorify as Christmas fast approaches.  We see it everywhere:  on church lawns, on ads and commercials, on Christmas cards.  It is a pretty scene, and gazing at it intensifies our desire to prettify our image and ourselves in such a way as to make us worthy of a place alongside Jesus, Mary, Joseph and the shepherds in the stable.

And yet, the reality is that nothing could have been further from the truth.  This was a stable, and truth be told, it was more of a hole, a cave dug out of the side of a hill.  Mary had just given birth and, I don’t know about you but, most mothers of newborns that I’ve seen don’t wear makeup and aren’t their most attractive even the day after their child is born.

We haven’t even mentioned the animals.  Sheep, cows, donkeys, they all live either outdoors or in barns.  Not with humans!

That manger – the real one – is a metaphor for the mess that is our lives, with its sweat, its smell, with its wrinkles.  And it is into this mess that Jesus chose to be born.  He came to clean up the mess.  To prettify us.  Not in a superficial or insubstantial way, but in a meaningful way.  It is because of Jesus that we are assured we will not have to wallow in that mess forever, but we will be prettified.

In baptism, our sins are washed away and we are cleansed of our iniquities.  Our sinful nature still exists; but thanks to that babe in the manger, who grew up to die on a cross for us, we can rejoice in the fact that we are not condemned to a life of eternal squalor.  And for that we say, “Thanks be to God!”

One thought on “The Prettified Manger”