“I have said these things to you so that my joy may be in you, and that your joy may be complete.” 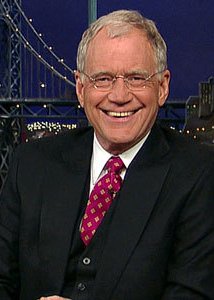 I haven’t always been a fan of David Letterman. I probably never watched his late night talk show on CBS with any regularity until I married my wife, Linda, ten years ago. She ritualistically never turned off the TV until she had, at the very least, seen Letterman’s “Top Ten.” Even though she had to wake up much earlier than I did, she would faithfully follow this routine, then wake up grumbling in the morning about how sleepy she was. So I was compelled to endure the routine. The things we do for love.

However, as one who can fall asleep at the turn of a switch, over time I found myself staying awake through the entire hour. I was intrigued by his interview skills, his ability to ask the tough question without being antagonistic, and to compliment without fawning.

In recent months my wife and I have gravitated to Jimmy Fallon, his NBC counterpart. We both agree that Fallon’s routines are fresher and livelier. Despite their obvious appeal to a much younger audience, we find them just as captivating to our demographic. Perhaps it’s a function of my penchant for childishness and silly humor.

When Letterman announced that he would be retiring, we felt guilty – as if somehow our disloyalty had led to his leaving. So in recent weeks we have been watching the “Top Ten” and quickly switching back to Fallon, hoping we haven’t missed much.

I read with interest a lengthy interview which recently appeared in the New York Times, and was struck by Letterman’s introspectiveness. He is obviously a keen observer of human nature, a man who has put a lot of thought into his craft and his career.

He is seemingly thankful for his good fortune. He has survived a quintuple heart bypass and a sex scandal that could have cost him his marriage, if not his livelihood. Through it all he has been able to maintain a sense of humor. And perhaps it is that ability to laugh that, despite his personal flaws and shortcomings, has enabled him to carry on with little damage to his reputation.

Given his private personality, not much is known about David Letterman’s faith. A quick internet search revealed that his mother worked for a time as a secretary for the Second Presbyterian Church of Indianapolis. Bu as to whether he worships regularly, or even believes in God, is known only to him and those closest to him.

Nevertheless, there was one telling statement in the interview in response to the reputation that he is not a warm person. Letterman ends his answer by saying, “It’s the Golden Rule. I try to be nice to people who are nice to me. I like doing nice things for people. It makes me feel good. But I think it’s legitimate.”

And Letterman has made me feel good by making me laugh – a lot.

Martin Luther is quoted as saying, “If you are not allowed to laugh in heaven, I don’t want to go there.”

And as I read the Times interview, I also couldn’t help but recall the words of Jesus from the Gospel reading for the Fifth Sunday of Easter: “I have said these things to you so that my joy may be in you, and that your joy may be complete.”

Yes, I’m very aware that it’s a totally different context. Some may go so far as to accuse me of heresy by drawing analogies between Letterman’s nightly joking and Jesus’ remarks to his disciples on the night before his crucifixion. But as he prepares to leave the airwaves, it’s remarkable to note how much this late night comedian has influenced the American public. It undoubtedly pales by comparison to the lasting joy of Jesus. Still, Letterman leaves us an enduring legacy of laughter that will not be fleetingly forgotten.

Linda and I are committed to watching Letterman’s entire final show on May 20. I may even record it for posterity. He is a unique talent and the excellence he has brought to the late-night genre will be difficult to attain, let alone surpass.

← REFRAMING OUR THINKING
HE ASCENDED INTO HEAVEN →